Manifest (Melbourne Anime Festival) is currently on this weekend and I set myself a task to suss out what people were thinking about the convention via twitter on the Friday and Saturday. I culled data from the hashtag #manifest and heavy filtering with ‘manifest’ and this is what I got.

A convention just isn’t a convention when people aren’t dressed up. Attendees really like to spread the word (going to the con!) and have an affinity to the word awesome to describe something they like.

SENTIMENTS
Majority of tweets lied in either positive or neutral; and stayed consistent between the two days. Sentiments were all manually labelled, considering the majority of the demographic like to be sarcastic and describe failings as a positive thing. 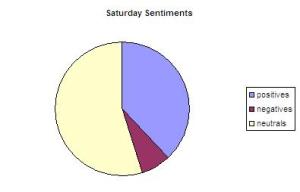 Some of the top keywords surrounding positive sentiments include:

Attendees get really excited over Pocky; and I believe the Gundam is related back to the Pocky one, as explained further down. An #animeidol hashtag started and people seemed to enjoy the event; and a lot of people loved bragging about getting press passes.

The words used in negative sentiments was pretty interesting. To summarise:

These would be the things the organising committee will probably address for their next show.

cosplay photographers are the best people. the press pit at the #manifest cosplay comp is awesome!! xd2 – neilcreek

This one is a personal favourite; best cross over tweet between the election and manifest 🙂

The entire Yaoi panel at #manifest seems to have voted for @aussexparty. Probably not a huge surprise. #ausvotes – ctudball

Whoever thought of the Pocky Gundam deserves a medal, cosplay is probably the most important element to the show and deodorant companies need to take note of this market!